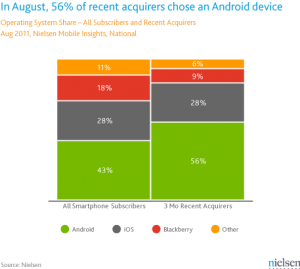 The real loser continues to be RIM and the catch-all ‘Other’ which would cover Windows Mobile, Windows Phone, WebOS, Symbian, etc. While 18% of all smartphone users use a Blackberry, and 11% use one of the other platforms, in the past three months only 9% of new smartphone sales have been Blackberrys and only 6% are other platforms, which are pretty much Windows Phone 7 and WebOS in today’s market. 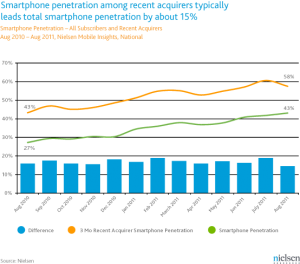 Also significant, the smartphone user base continues to grow. While only 43% of US cellular subscribers have a smartphone, in the past three months 56% of new activations were smartphones instead of feature phones or basic models. These figures are even more significant in that the three month recent subscribers numbers are a fairly reliable predictor of the market as a whole. The share of recent adoptions using smartphones historically leads the market share as a whole by around 15%. So the pool of smartphone users in the US is showing healthy growth.

The pie is getting bigger, and iPhone and Android are taking the lions share of it. Heading into the fall and the holiday buying season things look good for iPhone (especially if the iPhone 5 launches), positively great for Android, and pretty much abysmal for everyone else. RIM needs to pull a rabbit out of their hat soon, and Blackberry OS 7 sure isn’t it. As corporate IT departments increasingly offer a choice of Blackberry, iPhone, or Android devices, instead of mandating Blackberry, RIM’s traditional stronghold is crumbling.