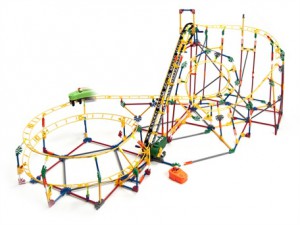 I loved toys like this as a kid… OK, so I’m 40 and I still kind of like toys like this. I started out with Tinker Toys, Lincoln Logs, and the like, and moved up to Girders and Panels, Erector, and, of course, Lego Blocks. I had some Capsela too. But K’nex didn’t hit the market until later.

. You… I mean the child you give this to, can build a roller coaster with a motorized chain lift so you can run the cars around on their own. But through the miracle of modern technology you get to experience riding your creation because of the cars is a miniature digital video camera! That’s definitely something we didn’t have when I was a kid. (Of course the Columbia House Music Club was still offering 8-Track and Reel-to-Reel along with cassette and LP when I first joined. Look all of that up, kids.)

It’s not high-def, the resolution is just 320×240, but still, how cool is that? You can record 15 seconds on the build in 16MB of storage or add a 2GB microSD card for longer recordings. Video is transferred to your PC via USB.

MegaZone is the Editor of Gizmo Lovers and the chief contributor. He's been online since 1989 and active in several generations of 'social media' - mailing lists, USENet groups, web forums, and since 2003, blogging.    MegaZone has a presence on several social platforms: Google+ / Facebook / Twitter / LinkedIn / LiveJournal / Web.    You can also follow Gizmo Lovers on other sites: Blog / Google+ / Facebook / Twitter.
View all posts by MegaZone →
This entry was posted in Toys and tagged Gifts, K'Nex, Kids.Woot, sale. Bookmark the permalink.
Performance Optimization WordPress Plugins by W3 EDGE