Posted on Friday, September 9, 2011 by MegaZone 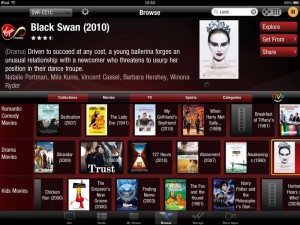 TiVo released their iPad app for US users back in January and updated it in July when they released their iPhone & iPod Touch version. Virgin Media also released an iPhone app in July. But now they’ve finally announced a version of the iPad app for the UK as well. Unfortunately, it isn’t being released just yet. It is tied to a “major software update” rolling out “in the coming months”. However, earlier Virgin Media specified October as the time frame for “the second drop” of software, so that seems to be a logical time to expect to see the iPad app as well.

From the press release the app sounds like a clone of the US app with a few tweaks to reflect the unique aspects of Virgin Media’s service. The images below are from the release.