Posted on Wednesday, September 7, 2011 by MegaZone

First off, sorry for that subject. Second, I want this! Well, OK, I really want something very much like it, but still. For years now I’ve been saying I wanted to see exactly this product and no one was making it. I’ve even doodled concepts when talking about it with others, and I swear Korea Telecom somehow got ahold of those sketches and used them as the basis for their new Spider Phone. 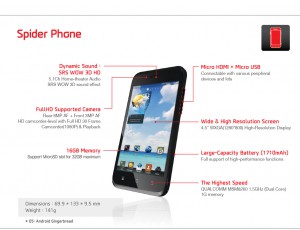 While the name is a little strange, the hardware looks very cool. It is an Android smartphone that can become a tablet, netbook, handheld gaming console, or a media set top box. They unveiled the new phone as the just-ended IFA conference in Germany, and the phone itself is quite a little powerhouse. Dual-core 1.5GHz Qualcomm MSM8260 CPU, 1GHz RAM, 16GB on-board storage expandable by up to 32GB with microSD, 8MP rear camera and 3MP front camera – both with autofocus, Full HD 1080p 30fps video recording, SRS WOW 3D sound, microHDMI and microUSB, and a shockingly high-res display – 4.5″ 1280×800 WXGA. Just as a phone it is at the high end of the Android range. The specs are up there with the Samsung Galaxy S II and the Motorola Droid Bionic, better in some areas.

With the growth in power of smartphones they’ve reached the point where they can legitimately compete with tablets and netbooks, even low end laptops. We’re seeing dual-core CPUs of up to 1.5GHz, 802.11b/g/n WiFi, Bluetooth, 3G & 4G data, etc. The only limitations have been screen size, input mechanisms, and battery life. And to a lesser degree port availability. The phone needs to stay small enough to fit in your pocket and be comfortable in the had. 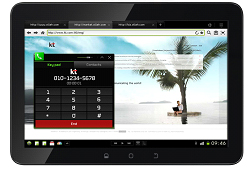 As I’ve said all over the net for the past few years, the smartphone can be the ‘CPU’ module for other devices. It contains the CPU, RAM, connectivity, primary storage, etc. If you want a larger display in tablet format you ‘dock’ the phone with a tablet sleeve. The sleeve has nothing but the larger screen and a battery. When docked the phone provides all of the brains, and the camera on the back of the phone is now on the back of the tablet. Depending on the design the front camera on the phone could also see through a hole or transparent section on the tablet bezel, or the tablet could have it’s own front facing camera. Connectivity is simple – microUSB for device support and microHDMI for the display. And this is exactly what KT has done.

Want a more productivity oriented system, something like a netbook or laptop, then there are two options. One is an Asus Eee Pad Transformer-style dock where the above described tablet docks with a keyboard base to form a netbook. This is elegant because you only have one larger display. And you could dock everything into one unit for a fairly compact carry – like carrying one netbook. 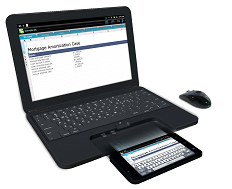 The other option is actually the one I thought of originally, and that KT is using. Simply another sleeve, a netbook this time of course, in which the phone docks just as with the tablet. KT is doing exactly what I’ve suggested in the past – you dock the phone where the touchpad is on most laptops, in front of the keyboard. The phone *is* the touchpad, and it could even be a small secondary display for custom controls for programs, etc. Imagine doing some editing work with your customized shortcuts available on command on the touchpad display (aka the phone). With modern touchscreens and a stylus it could act as a small digitizing tablet, etc. 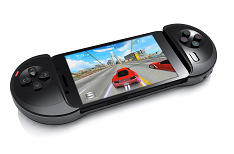 What about when you’re done being all productive and just want to relax and frag something? Gaming on smartphones is huge, but most games have been fairly simple, largely due to control limitations. Sony has their PlayStation Phone, but that’s a compromise. You’re carrying around the slide-out controls all the time, and they’re a little cramped. What about a sleeve that turns the phone into a handheld game console that looks quite a bit like a PSP (or maybe an Atari Lynx)? Pop in the phone and take advantage of the CPU and display that a better than any dedicated handheld game system, with controls better than any phone.

Finally, a bit more conventional for today’s smartphones, you can use the phone as a streaming media STB. Connect it to your HDTV via the microHDMI and stream HD video from the phone, online streaming services, etc., right on your big screen.

A couple of blogs have posted videos of the Spider Phone being demo’d at IFA 2011. The first video is from AndroidPIT and the second is from Areamobile. AndroidPIT has several great photos of the phone and sleeves in their post as well.

KT is the only company I’ve seen announce the full suite of sleeves, with a very powerful phone at heart. Before this the closest we’ve come is the Asus Eee Pad Transformer tablet-slash-netbook and the announced Asus Padfone smartphone-slash-tablet. In fact, the Asus Padfone tablet design and the KT Spider Phone tablet design are very similar. If only Asus would combine the Padfone with the Transformer and give it a keyboard dock (perhaps the same one), we’d have two smartphone/tablet/netbook options.

The Spider Phone has a few downsides however, at least from my perspective. The first, and largest, is that it is running Android Gingerbread. Gingerbread is a phone-centric OS and is not optimized for use on tablets, especially larger ones. It has been used on some tablets, but that was really a stopgap until Honeycomb was available. Honeycomb is the tablet-centric version of Android, but it lacks full phone support. So the right release for this would be Android Ice Cream Sandwich, which merges Gingerbread and Honeycomb and runs equally well on phones or tablets. In fact, that’s the version the Asus Padfone will be running. Since ICS isn’t due out until later this year, KT may have decided that launching with Gingerbread was expedient. But I really hope they have plans to upgrade to ICS once it is available. That would really unlock the potential of this hardware.

The other downsides aren’t as substantial, and may well be temporary. But the Spider Phone is currently only slated for the domestic market – South Korea – where it will launch in November or December. KT currently has no plans to release the phone in other markets. The phone is also a GSM device, and I really need something that’s CDMA/LTE for Verizon. (My employer’s corporate carrier.) So I probably won’t end up with a Spider Phone unless they bring it to Verizon in the US, but if they did I’d be sorely tempted even if it meant upgrading out of contract.

I’m just happy to see someone finally building the concept I’ve been pining for for several years. It is encouraging, as it means others may follow suite and that would increase my odds of finally owning such a system.

So, what I really want is something like the KT Spider Phone or an Asus Transformer/Padfone hybrid, available on Verizon with LTE support. Who’s going to build me my dream phone/tablet/netbook?

KT makes it seemingly impossible to link directly to press releases on their site, so here is the one for the Spider Phone:

KT reveals new smartphone All with one ; ‘Spider Phone’2011.09.02
? KT reveals ‘Spider Phone’ turning into various IT devices at IFA in Berlin, Germany
? Solving difficulties in high costs of buying multiple IT devices, complicated usage of each devices and managing data.
? It can also link with ucloud to provide N-Screen service.
? Expecting the device ecosystem cooperating with many manufacturers.

KT(www.kt.com), the leading telecommunication company in Korea, announces that the company unveils Spider Phone, a smartphone that can be turned into various IT devices at IFA (Internationale Funkausstellung Berlin) 2011 Consumer Electronics Fair in Berlin, Germany, from September 2 to 7.

Spider Phone can be connected with various different screens such as tablet PC, laptop and game kit etc. Those devices do not function stand alone, because they are not loaded with neither CPU, OS nor memory. However they do function with physical connection with Spider Phone.

Not only Spider Phone can provide mobile office environment linked with ucloud service but also connect with tablet PC or laptop, which enables to edit and manage documents. Additionally it can give a wide variety of game experiences for users through its 4.5-inch screen and well optimized keys to control the game kit comfortably and easily. Spider Phone will be launched this November developed by KT who started the project last November.

With the launch of Spider Phone, KT expects to solve many issues, including high costs of buying multiple IT devices such as a mobile phone, a laptop and a tablet. Also it can relieve the possible stresses of complicated usage of IT devices such as difficulties in managing data.

The company also stresses that Spider Phone can surmount the small screen problems of smartphone by combining with external kits. KT expects that Spider Phone will help the company and other manufacturers to enhance their global competitive edge based on the phone’s capability to expand into the N-Screen service easily and affordably.

Especially the key sources of hardware and software interface are disclosed, making any company manufacture external kits that can be connected to Spider Phone and ultimately helping promote the industry – Device Ecosystem.

KT plans to pave to create an environment where a single smart phone can control all information and devices around it by even linking with non-IT industry products such as health care devices etc.

“Spider Phone is an innovative device that can impress the global smartphone market, and I’m sure it will draw a lot of attention at IFA,” said Kyeong-Soo Lee, Executive Vice President of Device Strategy Department, who supervised the development of Spider Phone. “KT has already offered leading companies in Korea to build a new device ecosystem together, and I hope we will get a lot of favorable responses at the event”

KT’s cloud service features full line-up infrastructure, which cannot be found in any other local competitors’ services. Any service related to IT infrastructure is available, and IT infrastructure can be established over the net within five minutes, which would otherwise take a whole week when using IDC hosting service.