Save up to 60% on Belkin Surge Protectors at Amazon 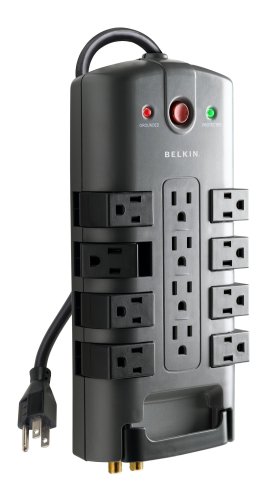 There’s really no way to make a sale on surge protectors sound exciting, is there? Surge protectors are just so utilitarian and plain. But a little money spent on a good one can save you from replacing pricey gear. So the good news is you can spend even less as Amazon is offering up to 60% off on Belkin surge protectors.

More specifically there are 27 models to choose from in a variety of shapes and sizes with discounts actually ranging from 91% down to 0%. Yeah, seriously, they’ve listed a few models in the ‘sale’ with no discount. No, I don’t get it either. One is even listing a price higher than MSRP! But there are 22 models that are actually discounted to choose from.

MegaZone is the Editor of Gizmo Lovers and the chief contributor. He's been online since 1989 and active in several generations of 'social media' - mailing lists, USENet groups, web forums, and since 2003, blogging.    MegaZone has a presence on several social platforms: Google+ / Facebook / Twitter / LinkedIn / LiveJournal / Web.    You can also follow Gizmo Lovers on other sites: Blog / Google+ / Facebook / Twitter.
View all posts by MegaZone →
This entry was posted in Amazon, General and tagged Amazon, Belkin, Gifts, sale, Surge Protector. Bookmark the permalink.
Performance Optimization WordPress Plugins by W3 EDGE