M-x psychoanalyze-pinhead is All Grown Up 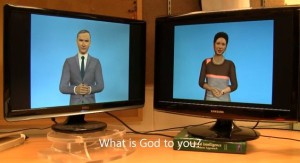 Some of you, like me, are probably emacs users. And some of you may have, at some point, played with some of the sillier elisp extensions, such as M-x psychoanalyze-pinhead. For those who don’t know, it pits Eliza, one of the first ‘chatbots’ in the guise of an analyst against the Zippy the Pinhead quote generator. Wackiness ensues. I could not help but think of that while watching this video.

Researchers from Cornell’s Creative Machines Lab pitted two chatbots against each other in a talk-off, which rapidly degraded into a verbal sparring match. Though it did generate some great non sequiturs. I predict this is already being printed on T-shirts right now: “I’m not a robot. I’m a unicorn.”

Of course, the other thing it reminds me of is any number of comment threads and web discussions I’ve read over the years. On this flamewar made more sense than many of those.

(Try M-x spook sometime too, if you’re install has it.)

MegaZone is the Editor of Gizmo Lovers and the chief contributor. He's been online since 1989 and active in several generations of 'social media' - mailing lists, USENet groups, web forums, and since 2003, blogging.    MegaZone has a presence on several social platforms: Google+ / Facebook / Twitter / LinkedIn / LiveJournal / Web.    You can also follow Gizmo Lovers on other sites: Blog / Google+ / Facebook / Twitter.
View all posts by MegaZone →
This entry was posted in Blogs, General and tagged Cornell, Emacs, Engadget, humor, Video, YouTube. Bookmark the permalink.
Performance Optimization WordPress Plugins by W3 EDGE