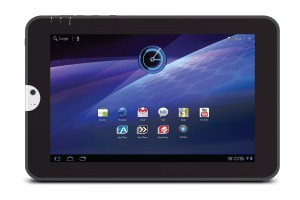 After Liliputing and Ars Technica gave the Thrive fairly favorable reviews it seemed like we had a trend going – but Gizmodo bucks that trend in their review, which is pretty harsh. It is clear the reviewer didn’t care for the Thrive:

Do I want a tablet that’s more like a PC? No. Especially not when “more like a PC” includes pre-loading my device with piles of bloatware that I’ll never use, proprietary crapps that I can’t delete. I do not want to visit your App Place, Toshiba, or your Book Place or any Place you want to take me. I don’t get in cars with strangers. The display? Your scan lines are showing. Do I mention its fatty, awkward size and the shape? Thrive feels like you’re holding a GoKart steering wheel. If this is what it takes to get MiniUSB on a tablet, I’ll pass on the MiniUSB.