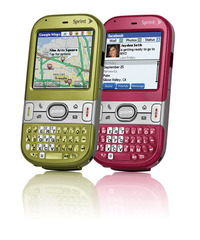 According to The Official Palm Blog, Palm is releasing two new models of the Centro smartphone for Sprint, in Olive Green and Vibrant Rose. But new colors are the only differences, these Centros come with 128MB of memory, double that of the 64MB in all other Centros. They also come bundled with Facebook for Palm and Google Maps with the My Location feature, and a new low price of $79.99 (with a plan).

The new phones hit select retail locations on October 19th, and will be available online from Sprint and the Palm Store on November 2nd.

MegaZone is the Editor of Gizmo Lovers and the chief contributor. He's been online since 1989 and active in several generations of 'social media' - mailing lists, USENet groups, web forums, and since 2003, blogging.    MegaZone has a presence on several social platforms: Google+ / Facebook / Twitter / LinkedIn / LiveJournal / Web.    You can also follow Gizmo Lovers on other sites: Blog / Google+ / Facebook / Twitter.
View all posts by MegaZone →
This entry was posted in Palm OS and tagged Centro, Palm, Sprint. Bookmark the permalink.
Performance Optimization WordPress Plugins by W3 EDGE