ReplayTV gets back into the hardware business 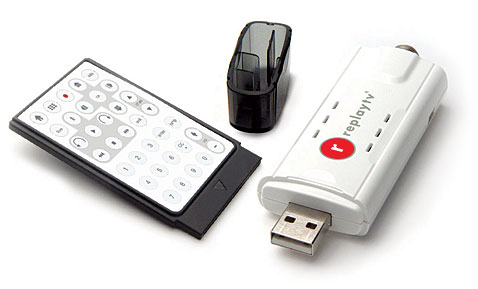 Kinda, sorta… OK, not really. Oh, how the mighty have fallen.

An anonymous tipster emailed Gizmodo a shot of the upcoming ReplayTV Personal HD – an HDTV tuner in the form of a USB dongle. This is likely designed to work with the ReplayTV-branded PC software, which has been an also-ran in the market since it launched in mid-2006, despite an effort to boost sales with a price cut in March of this year. There are simply better options – cheaper and/or more capable.

PVR Wire @ TV Squad points out that this product looks an awful lot like a white Hauppauge WinTV-HVR-950. The WinTV-HVR-950 can tune OTA ATSC or NTSC or analog cable – but no digital cable. That isn’t surprising as the only cards currently supported by the ReplayTV PC software are the Hauppauge WinTV PVR 150 and WinTV PVR USB2. The little remote, which looks like it could be PCCard (PCMCIA) format for storing in a laptop, looks like a new addition to the product.

This is just a sad recycling of a once-proud brand name, like AOL using ‘Netscape’ on various idiotic products.

MegaZone is the Editor of Gizmo Lovers and the chief contributor. He's been online since 1989 and active in several generations of 'social media' - mailing lists, USENet groups, web forums, and since 2003, blogging.    MegaZone has a presence on several social platforms: Google+ / Facebook / Twitter / LinkedIn / LiveJournal / Web.    You can also follow Gizmo Lovers on other sites: Blog / Google+ / Facebook / Twitter.
View all posts by MegaZone →
This entry was posted in ReplayTV. Bookmark the permalink.
Performance Optimization WordPress Plugins by W3 EDGE